The long and inspiring history of women in tech

Contrary to modern gender stereotypes, female innovators have been at the forefront of technological advances throughout history. This year’s Women’s History Month offers an ideal opportunity to trace the history of women in tech. 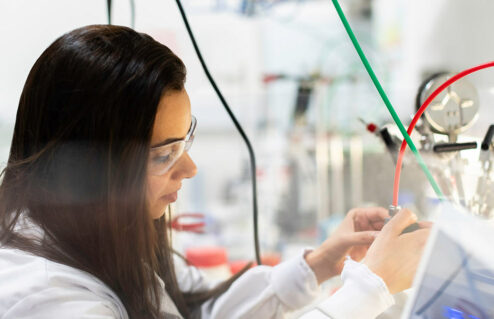 On 8 March 2021, the world held another year of (mostly virtual) gatherings to advance the cause of economic, social, and political empowerment for women around the world.

The theme of this year’s International Women’s Day, #ChooseToChallenge, encouraged individuals and organizations to renew our commitment to challenging the status quo when it comes to gender bias, inequality, and injustice.

It was a bold call, steeped in the true history of International Women’s Day – which arose out of the very political fights for women’s suffrage and workers’ rights in the early 20th century. The global response to the #ChooseToChallenge theme was a reminder that IWD is far more than just a day of recognition, and that the fight for a more equal and just world continues into our time.

One of the ways that we in the tech industry can challenge outdated elements of the status quo is by exposing the persistent biases in our own professional world. In few places is this bias more persistent, foolish, and historically inaccurate as in society’s collective perceptions of ‘women in tech’.

Women at the forefront of technology

The gender gap is persistent, and it is real.  According to the World Economic Forum, gender parity will not be realized until the 20s…. the 2120s, that is.

The tech industry remains one of the gender gap’s worst offenders, and as a result many people are simply unaware of the influential role women have played in the development of modern technology since the beginning of the Industrial Revolution.

Despite facing social, political, and economic barriers their male counterparts did not have to endure, many of history’s tech pioneers have been women.  Their achievements are recognizable throughout modern technology and areas of scientific knowledge which continue to make their mark today.

Here’s a snippet of just a few female difference-makers who challenged the established conventions and expectations of their world – and inspire us to do the same in ours.

18th century – tracing the origins of women in tech

During much of the 18th and 19th centuries, women did not have the right to participate in the political process across most of the world, and were closed off from serving in many key professions. It’s enough to make you wonder how much further society would have advanced if over half of the population had not been largely excluded from scientific and technological fields.

Yet despite these structural barriers, women contributed in important ways to the technological advances of that time. In 1762, Nicole Reine Lepautre, a French mathematician and astronomer, accurately predicted the return of Halley’s Comet by calculating the timing of a solar eclipse and constructing a group of catalogs for the stars.

Halley’s Comet, which has been observed and recorded by humans since 240 BC, is the only known comet that can appear twice in a human lifetime. Nicole Reine Lepautre’s research contributed significantly to our understanding of the comet and its regular reappearance. Hopefully, by the next time Halley’s Comet comes around in 2061, the last outdated relics of gender bias – in both the tech world as well as society as a whole – will have been fully dismantled.

Although women started being offered the possibility not only to study, but also to teach in colleges during the 19th century, female faculty members were forced to quit if they decided to get married. It’s no wonder that balancing career and family is still such a central topic when it comes to modern day discussions of gender equality.

But neither formal obstacles, nor the sole responsibility for caring for the home, could hold back women like Ada Lovelace – who is recognized today as one of the first computer programmers. Lovelace is best known for her work on the Analytical Engine, the mechanical computer proposed by Charles Babbage which calculated algebraic functions over 100 years before the first general purpose computer.

Lovelace’s impact on our world of tech should be quite familiar – having discovered that her colleague’s machine could have applications beyond basic mathematical calculation, she is credited with publishing the very first algorithm.

Early 20th century – women on the battlefields of engineering, mathematics, and world wars

The second Industrial Revolution in the late 1800s intensified women’s interaction with technology. Later, women played in integral role working in factories, as telephone operators, and even as snipers during both world wars. Amelia Earhart, meanwhile, is famous for being one of the early pioneers of aviation.

Behind these more visible contributions, there is also a rich history of women making an impact in highly technical fields. Building on the legacy of Ada Lovelace, the German mathematician and philosopher Grete Hermann was instrumental in establishing algorithms for abstract algebra, which served as a steppingstone for modern-day computer algebra.

Hermann also made important contributions to the theory of quantum mechanics.

Women in tech in the postwar era

World War II and beyond

Few people today may have heard of Hedy Lamarr, the Austrian-born film actress and inventor, but she has some impressive accolades to her name. Born in 1914, Lamarr starred opposite actors like Clark Gable and James Stewart in several early Hollywood films, and probably would have achieved fame as a movie star alone. Yet she also made breakthrough contributions to the defeat of fascism in World War II, as the co-inventor of a radio guidance system for Allied torpedoes. Based on an early version of spread spectrum technology, Lamarr’s innovation would later form the basis for many other wireless communications, including long-range naval communication and eventually even Bluetooth.

Although Rosie the Riveter might have captured the popular imagination, women in the United States made highly visible contributions to many other aspects of the Allied war effort. In 1942 a group of women were hired by the U.S. Army to program the ENIAC, one of the first computers. The work of Kathleen McNulty, Betty Jean Jennings, Frances Bilas, Elizabeth Snyder Holberton, Marlyn Wescoff and Ruth Lichterman, collectively known as  “the ENIAC girls”, would go on to revolutionize computer programming.

In the commercial space, we cannot fail to mention Evelyn Berezin, who both created the world’s first word processor and developed the first airline ticket reservation system during the 1960s and 70s; Mary Kenneth Keller, developer of the BASIC programming language, who in addition to being a Roman Catholic nun was one of the first two people to earn a PhD in computer science in the United States; and Grace Hopper, inventor of the first natural language processor as well as the COBOL programming language, which is still used in business, finance, and administrative applications to this day.

In the early 1970s Hopper was instrumental in encouraging the United States Department of Defense to switch from large, centralized computer systems to networks of small, distributed computers connected via a common database – an innovation that would pave the way for the emergence of the consumer internet 20 years later.

Women in tech in the 21st century

It’s stories like those of Hedy Lamarr, Mary Kenneth Keller, Evelyn Berezin, and Grace Hopper which show how foolish today’s tech gender gap really is. Perhaps instead of fighting an ongoing battle for more representation, women should be in the position of being recognized for enabling our tech-driven world in the first place.

This is especially true when considering that the fight for gender equality in the tech space increasingly also has a strategic component, with companies in constant need of fresh tech talent. And talent has no gender.

Still, while significant overall efforts have been made to reduce the gender gap in the workplace, many companies still indicate only a small percentage of female tech employees.  In addition to WEF’s Gender Gap Report, another worthy read on this topic is the Women in Technology Survey 2019. The survey’s key findings pinpoint important areas that individuals as well as companies can look toward when trying to make a difference.

Here an overview of some of the WiT Survey 2019 key stats:

Women in tech at PayU

With the support of our D&I council, we at PayU we are doing our best to motivate and support female employees wanting to grow in tech.

As a company we recognize the need for supporting and encouraging female leadership within the tech space, while demonstrating the importance of active participation.

Three examples of Women in Tech initiatives at PayU

Choosing to challenge the tech status quo in 2021

As another Women’s History Month comes to a close, our responsibility to push for a more just and equal world continues. And while the tech space still has a lot of work to do in terms of equal opportunities and gender representation, the history of women at the forefront of technological change and development provides an inspiring example of how increasing the scope for diversity and inclusion benefits everybody.

At the same time, we know that challenging outdated perceptions of ‘women in tech’ isn’t only a matter of coming up with new strategies and initiatives for the 21st century. We can also learn from becoming more aware of the history that is already with us.

With the world changing fast, the contributions of women to the tech field isn’t just a niche topic for discussion in panel sessions during one month each year. Women helped invent the modern day tech industry, and will be fundamental to the future of a world increasingly dependent on it.

D&I is our DNA

Past, present, future – D&I is at the heart of everything we do.

Learn more about D&I at PayU
1